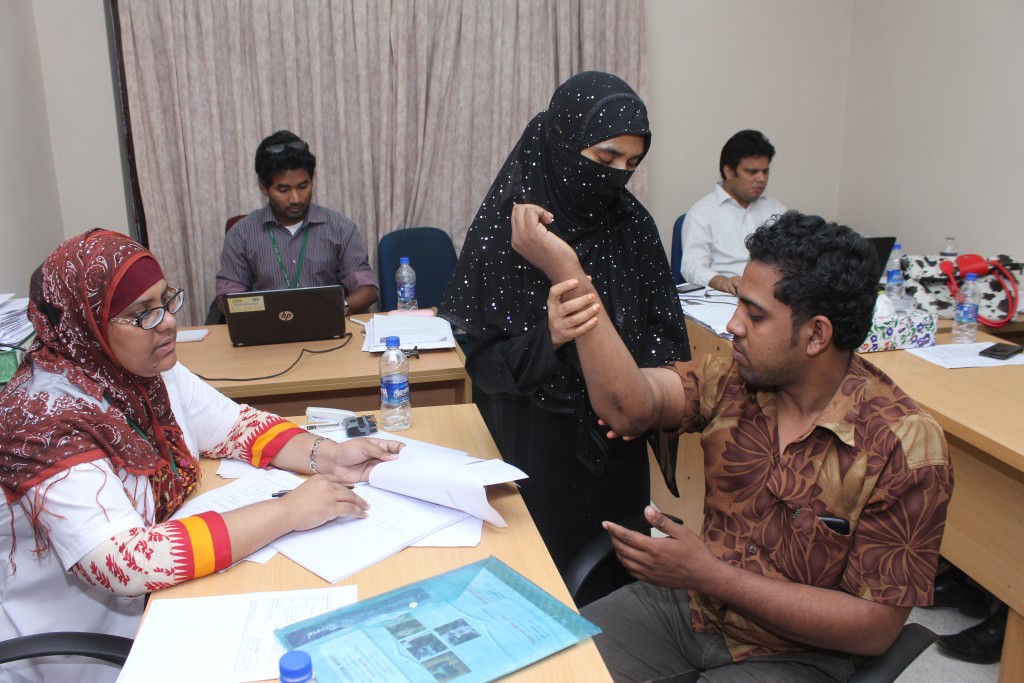 This update aims to provide a status report regarding the progress to date of the work of the Tazreen Claims Administration (TCA). All data is correct as of 25 April 2016.

A number of different organisations have provided extra names for inclusion on the Tazreen Master list. The TCA has engaged with each of these to establish further details, but to date has not received sufficient extra information to merit their inclusion. In a handful of cases the TCA is working with the organisations involved to attempt to establish the minimum documentation required for the claims process.

The Tazreen Claims Administration stopped receiving new claims on  15 February 2016. Prior to this deadline 13 injured claimants and 1 claimant of deceased victim were in contact with TCA, but were unable to register in time. TCA invited these claimants to attend CRP, Savar on 8 March 2016 for registration of their claims. A total of 9 injured claimants attended CRP, Savar and all 9 claimants were registered. Of these 9, 1 claimant has been asked to return to the TCA office in order to verify documents. This claimant has now had her claim registered, reviewed and a notice of award was issued

For deceased and missing workers TCA had originally deducted BDT 7,00,000 (Bangladesh Taka seven hundred thousand) from each award payable on a claim. With the agreement of the Co-ordination Committee, TCA has recalculated the awards with a deduction of only BDT 300,000 (Bangladesh Taka three hundred thousand) for each deceased and missing worker. This BDT 300,000 represents a part of the BDT 700,000 amount provided to claimants by the Government of Bangladesh immediately after the fire.

Therefore, based on this policy decision, the families of each deceased and missing worker would be entitled to an additional BDT 400,000 (Bangladesh Taka four hundred thousand).

Issuance of Notice of Awards (NOA)

NOAs for all the deceased and missing victims had been issued to the claimants in January 2016, but following the decision of the Coordination Committee to reduce the amount of deductions that would be applies to awards the NOAs had to be re-issued. NOAs for injured workers have also been issued.

Following the original issuance of the NOAs in January 2016 a total of 10 written requests for correction of awards were received. These included requests to cancel the applied deduction, requests to include or exclude certain dependants from the award and the correction of inaccurately recorded relationships of the claimant with the victim. TCA has reviewed and considered the requests and taken steps to address the matters as necessary. There is only one correction that led to an impact on the amount awarded overall and two corrections which impacted on the apportionment of the award between dependents.

In addition, TCA received letters filing new claims from 9 injured workers during April 2016. Given the 15 February 2016 deadline for registration of new claims and the absence of these workers’ names from important lists, it is highly unlikely that these claims can be accepted. TCA is looking into the matter and aims to respond to these new claims accordingly.

The TCA is currently awaiting the decision of a sub-Committee set up to oversee long term care for Rana Plaza victims, which is considering the establishment of a local trust to provide medical care to Rana Plaza survivors with moderate to mild long term physical and psychological injuries. Once this is agreed the TCA may request to join the initiative to ensure long term treatment for Tazreen survivors. The outcomes of these discussions will be reported in future updates.

Arrangements are made with Dutch-Bangla Bank Rangpur Branch for issuance of savings certificate (sanchaipatra) for 44 claimants of deceased and missing workers and for 15 injured workers in Rangpur region. On 18 April 2016, 43 claimants from deceased and missing workers completed saving certificate application forms in the presence of the Manager of DBBL, Rangpur Branch and his staffs in Rangpur District.  The one claimant who was unable to visit Rangpur to complete the saving certificate application form on 18 April 2016 will submit the form directly to the DBBL Rangpur Branch in the next few days.

The Tazreen Steering Committee met on 6 March 2016. The meeting addressed issues regarding additional claimants, changes to deductions, financial counselling to beneficiaries, and in particular recommended providing assistance to claimants for buying savings certificates, disbursement of awards and long term medical care. The members present in the meeting, which included representative from the Ministry of Labour and Employment were also briefed on the current status of the work of TCA and the remaining work, stages and operational plans.

The Tazreen Coordination Committee met on 13 March 2016. The meeting discussed ongoing administrative issues relating to the claims process, proposals for the provision of long term medical care, submission and follow up of new claims and post award counselling and payment of awards.